Rev. Chukwudi Jovita Okonkwo (Fr. Jo or Jovis as he prefers to be called) hails from Uli in Nigeria, sixth among the eight children of Martin and Priscilla Okonkwo. Fr. Jo received his elementary education both at home and at Holy Ghost Primary School, Ndiegungwu Uli, where his dad taught for several years, before retiring as headmaster. At the age of four, he knew that he was called to the priesthood and announced same to the family, which from then started to call him “Fr. Jo.”

From the age of ten, the incredibly young “Fr. Jo” would enroll as a minor seminarian at the diocesan preparatory seminary. Completing his high school education at the seminary in 1987, he entered the regional major seminary to study Philosophy. Upon finishing his studies with a bachelor’s degree in philosophy, he took the next step toward the priesthood by studying Theology at Bigard Memorial Seminary, Enugu. On August 23rd, 1997, his calling and aspiration to be Fr. Jo -- not just in name but in fact -- was fulfilled and ratified when he was ordained a priest for the Catholic Diocese of Orlu by Bishop Gregory Ochiagha. He took his priestly motto -- “lutum in manu Dei” (clay in God’s hand) -- from the words of Isaiah, the prophet (Isaiah 64:7).

Fr. Jovis served as associate pastor at several parishes in the diocese of Orlu; and in the year 2000, he became the pastor of St. Andrew’s Parish Umueshi, Nigeria (and a high school English tutor at St. Dominic Savio Secondary School). He served the parish for four years, after which Bishop Gregory wanted him to gain more priestly experience and exposure with the outside world -- a move that saw him in Italy and the United States.

From November 2004, Fr. Jo has served various parishes and institutions in the diocese of Tulsa. His first assignment in the United States was to serve the parishioners of St. Pius X Tulsa whose pastor, Fr. Tom Hildebrand, had just passed a few days after Fr. Jo arrived Tulsa. Bishop Slattery instantly asked Fr. Jo to provide pastoral care to the parish. After a pastor was named for St. Pius, Fr. Jo served at Holy Family Cathedral for a while, and returned as associate pastor of St. Pius X, under Fr. Michael Knipe.

In 2007, Bishop Slattery tapped Fr. Jo to serve as the chaplain of the Newman Center at the University of Tulsa as well as pastor of Sacred Heart Parish, Sapulpa. During his years at the University of Tulsa, Fr. Jo enrolled as a graduate student for the Industrial and Organizational Psychology program. He later relinquished the chaplaincy position to focus more on his graduate studies. Graduating with Master’s in Organizational Dynamics in 2011, he went on to enroll in doctoral studies at the University of Oklahoma. In 2014, he completed his PhD in Interdisciplinary Studies with focus on Organizational Leadership, defending his dissertation: “The Effects of Servant Leadership on the Socio-moral Climate of Catholic Parishes and the Spiritual Well-being of Followers.”

In July 2014, Bishop Slattery named Fr. Jovita the new rector of Holy Family Cathedral, succeeding Monsignor Gregory Gier. He served for five years as the rector of the cathedral before the new bishop of Tulsa, David Konderla named him the Dean or Vicar Forane for the Southern Vicariate of the diocese of Tulsa and pastor of St. John the Evangelist Parish McAlester, Oklahoma.

Fr. Jo loves to read and write while listening to classical music. He is an avid chess player and gardener. St. John’s Parish is glad to have him as our pastor and dean of our region. 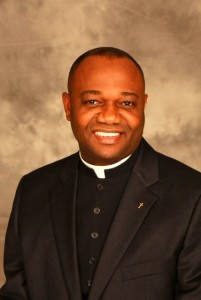